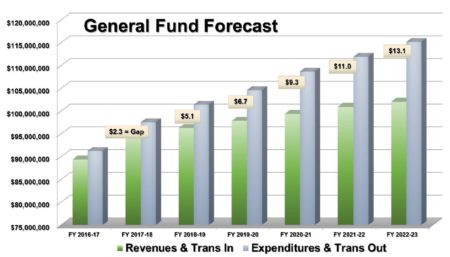 On February 21, 2017, staff for the City of Salinas presented their “Fiscal Year 2016-17 Mid-Year Budget Review and Budget Adjustments” to the city council. It contained some bad news for taxpayers:

This mid-year review includes information that will help tackle a significant issue that the City has faced for many years, which is the structural deficit of the General Fund. The structural deficit has recently grown because of the Salinas Police Officers Association (SPOA) three year contract and from the recent CalPERS reduction in the discount rate that was approved December 21, 2016 by the PERS Board, with more changes expected next year. Projecting out 20 years, the cost drivers of salary, health care, and retirement exceed the future revenue. It is imperative that the City Council and City Staff understand this structural issue as we plan for the future and how we manage our resources.

Staff have put together the framework of a sustainability plan that will serve as a tool to eliminate the structural deficit. The plan identifies both short-term and long-term strategies to raise revenues, reduce expenditures and realign spending to higher priorities. Departments were asked to innovate how to eliminate the structural deficit. Some of the ideas have not been valued since it is still too preliminary, however, where realistic estimates could be made, dollar values were assigned over a five-year horizon. Twenty-five revenue generating ideas were identified that ranged from $1,535,300 to $6,296,000 over the next five years between FY 2017-18 and FY 21-22. Departments also came up with 85 expenditure reduction or savings ideas that totaled $2,767,850 and $4,632,850 over the same five years.

CalPERS is the California Public Employees’ Retirement System, which has 1.8 million members in its retirement system and administers benefits for more than 1.4 million members and their families in its health program. With a market value of $311 billion, CalPERS is the largest defined-benefit public pension in the country. It reported a preliminary 0.61 percent net return on investments for the 12-month period that ended June 30, 2016. The staff report to the Salinas City Council highlighted a major cause of the city’s structural deficit:

At the December 21, 2016, meeting, the CalPERS Board of Administration approved lowering the CalPERS discount rate assumption, the long-term rate of return, from 7.50 percent to 7.00 percent over the next three years. This will increase public agency employer contribution costs beginning in Fiscal Year 2018-19…Lowering the discount rate means plans will see increases in both the normal costs (the cost of pension benefits accruing in one year for active members) and the accrued liabilities. These increases will result in higher required employer contributions.

Those pension obligations to city employees need to be paid. Expect to see fee increases proposed soon for a variety of city services.