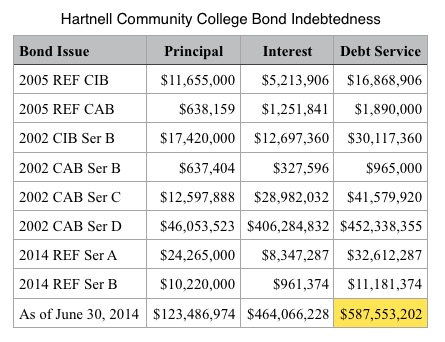 Borrowing money for construction through the excessive sale of “Capital Appreciation Bonds” has turned a $131 million bond measure into a $588 million debt hole that stays under the radar in Salinas. The Salinas Taxpayers Association has been critical of one series of bonds (“Series D”) issued by Hartnell College in 2009 in which the repayment of principal and interest over 25 years will be about ten times more than what was borrowed.

The Salinas Taxpayers Association rang alarm bells about a bond Hartnell College issued in 2009, scheduled to run about 10 times the cost of the bond to repay over a 25-year period.