In December 2014, the Monterey County Board of Supervisors voted to negotiate a government-mandated Project Labor Agreement with the Santa Cruz/Monterey Counties Building and Construction Trades Council for the construction of the Monterey County Water Resources Agency Interlake Tunnel Project. (See a timeline of this development here and news coverage here.) In May 2015, the board of trustees for the Salinas Union High School District voted to do the same for the construction of a new high school funded by Measure B. These are the first government-mandated Project Labor Agreements in Monterey County since the Hartnell Community College District Library and Parking Structure in 2004.

As attorneys for the unions circulate a standard template for the Monterey County Water Resources Agency and the Salinas Union High School District to sign, we want these public agencies to take their negotiating roles seriously and consider the taxpayers, who want construction built according to specifications at the best price.

Here are our concerns:

The Salinas Taxpayers Association believes construction companies that work under a government-mandated Project Labor Agreement should be able to continue paying fringe benefits into their own benefit programs provided for employees, if those programs are independently confirmed to provide equivalent benefits to those provided by the unions. Cutting bid competition (for both general contractors and subcontractors) from responsible companies through stringent Project Labor Agreement requirements will likely raise construction costs.

A Project Labor Agreement that require contractors to make fringe benefit payments to multi-employer union-affiliated defined benefit plans instead of their own defined contribution plans is an obvious example of favoritism. And considering the tendency of many union benefit trust funds to be underfunded – even now in a time of relative economic prosperity – a policy decision that requires bidders to make benefit payments to specific union trust funds and thus discourages bid competition is unjustified.

In addition, the Salinas Taxpayers Association is concerned that the restrictive specifications in the Project Labor Agreement will artificially set up a bidding advantage for out-of-area (specifically, Bay Area) construction companies that already feed off of Project Labor Agreement contracts in the Bay Area. Local governments in Salinas should not adopt any mandates that would discourage local contracting and reduce local commercial activity. Part of a prudent fiscal policy for a local government is making sure local companies are welcomed and encouraged to bid on its contracts.

The Salinas Valley Chamber of Commerce produced a report comparing the percentage of contract amounts awarded on two large projects at Hartnell Community College District in Salinas – one project under which contractors were required to sign a Project Labor Agreement with unions, and one under fair and open bid competition. Here are the results:

Meanwhile, the Salinas Taxpayers Association sent the following letter dated April 15, 2015 to Assemblyman Jim Patterson in support of Assembly Bill 842, which allows public works construction contractors working under a government-mandated Project Labor Agreement to pay fringe benefits (for health insurance, retirement, etc.) to their own employer-provided programs (including defined contribution plans such as a 401k) if they provide equivalent benefits to the local union master labor agreement. This letter was subsequently sent to the board of the Salinas Union High School District. 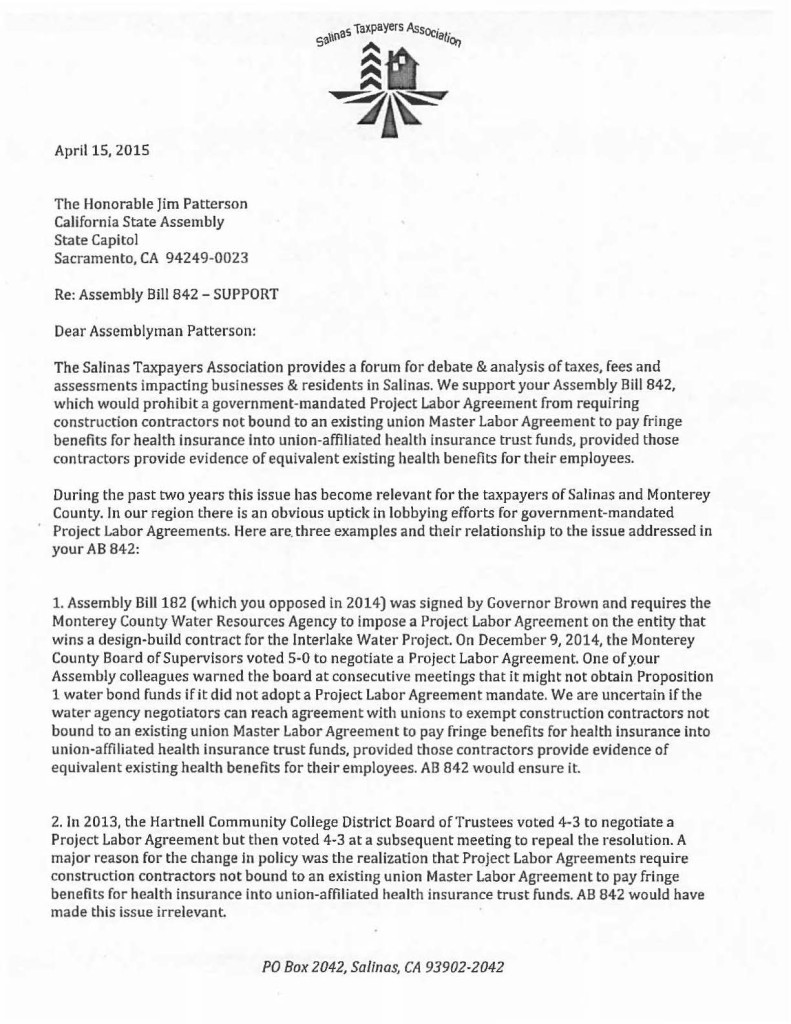 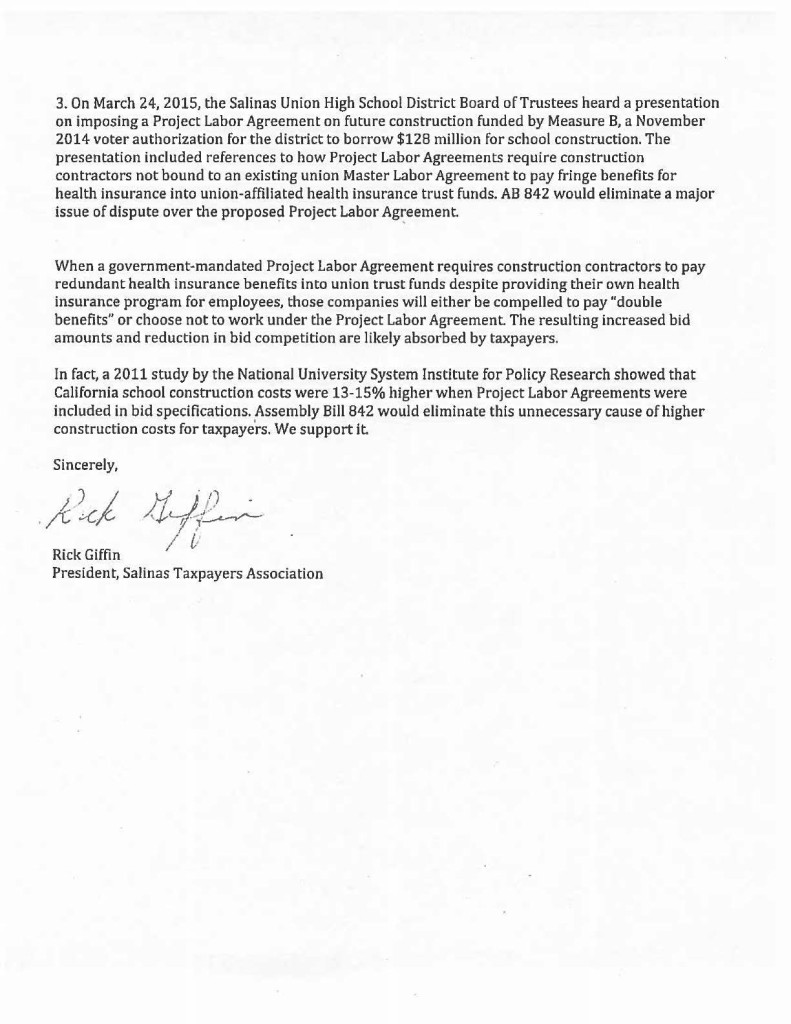