UPDATE: The Salinas Union High School District board of trustees has scheduled a special meeting on November 1, 2017 to discuss the challenges and schedule changes for the construction project in closed session (behind closed doors). They can do this because they anticipate a possibility of litigation. It is likely that the public will get future news about the progress of this project from cautious official district statements.

Today (October 30, 2017), the Salinas Taxpayers Association emailed a five-point plan to the board and top administrators of the Salinas Union High School District to address the Rancho San Juan High School construction project. (See below.) 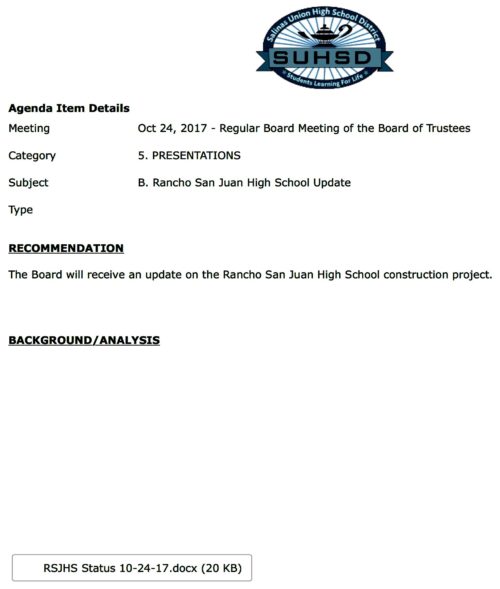 At their October 24, 2017 meeting, the board of the Salinas Union High School District discussed the revelation that their new high school was “severely behind schedule” and wouldn’t be finished in time for the 2018-2019 school year. An audio recording of the meeting revealed the belief of some board members that the construction project had somehow been sabotaged by political opponents.

The item on the October 24, 2017 board agenda: PRESENTATIONS: Rancho San Juan High School Update with BACKGROUND/ANALYSIS document and slide presentation at meeting.

The Salinas Taxpayers Association is concerned that the Rancho San Juan High School construction project is a pending disaster for taxpayers of the Salinas Union High School District.

(2) Also in November 2015, the district borrowed an additional $45 million for this project by selling Bond Anticipation Notes. The district must pay that money back to investors by 2020, with interest, for a total (with interest) of $49.7 million.

(3) Note that the district still has $41 million in debt service outstanding from its 2002 bond measure. That money, which included interest, also must be paid back to investors.

The district needs to immediately develop and implement a plan for speeding up construction of the Rancho San Juan High School project at a reasonable cost to taxpayers.

As revealed in the audio recording of the October 24 board meeting, the board is right now inclined to spend time and energy trying to blame some parties for this failure while trying to exonerate other parties. Board discussion at that meeting concluded with a call not to tell the public what was happening.

Here is a construction alternative plan for the board to consider:

1. Appoint an independent citizens advisory committee to quickly research and prepare recommendations to the board in consultation with involved parties and outside experts.

This project is regrettably entangled in political issues because of a special provision in bid specifications that requires all construction contractors to operate as union companies for the duration of the project. Any solutions developed by the board would be considered through a perspective of how various special interests groups would respond to it.

An independent advisory committee could research and propose options for speeding up the project at a reasonable cost without fear of political ramifications. We suggest using the Citizens Bond Oversight Committee as the core of this group, with perhaps some other additions.

2. Be transparent and open with the public about what is happening.

As board members, you serve the public, not your own political reputations. Regrettably, one of the board members is running in a highly-competitive election for state legislature, which means every board decision is now distorted by how it would be perceived in a political campaign. It’s time to reveal the dilemma to the public and ask them for patience – and assistance. (See #3.)

3. Organize community pressure to get the skylight manufacturer to expedite production.

Launch a community grassroots campaign (letters, phone calls, news media coverage, etc.) calling on the skylight manufacturer to finish production and ship the windows. This would do two things: (1) it would probably be effective in speeding up the production and shipping; and (2) it would unify the community around a proactive campaign to try to solve the problem. Organizations and individuals can all participate in this plea to get the skylights delivered.

4. Suspend the Project Labor Agreement for the duration of the project.

In 2015 the Salinas Taxpayers Association opposed the Project Labor Agreement because of its potential impact on bid competition and cost. This extra layer of regulation involving unions was not necessary for successful completion of the project. In retrospect it appears to be related to a board member’s ambition to get elected to the state legislature.

Whether or not the Project Labor Agreement had any impact on the project failure, it is a policy that distinguishes the district’s high school construction from what every other Monterey County local government is doing with its construction projects. Why must it stay in place?

Law firms now see the opportunity to make a lot of money representing the Salinas Union High School District. We expect the school board will attempt to pay for these legal costs with the proceeds of the bond measure, meaning that taxpayers will be paying interest for as long as 30 years on money borrowed for legal expenses. We will be paying an important public oversight role in tracking your legal expenses, and we will make the district accountable if it cannot control those costs.

The Salinas Taxpayers Association will have a representative at your next meeting to reiterate these ideas. We recommend you adopt all five ideas at that time.